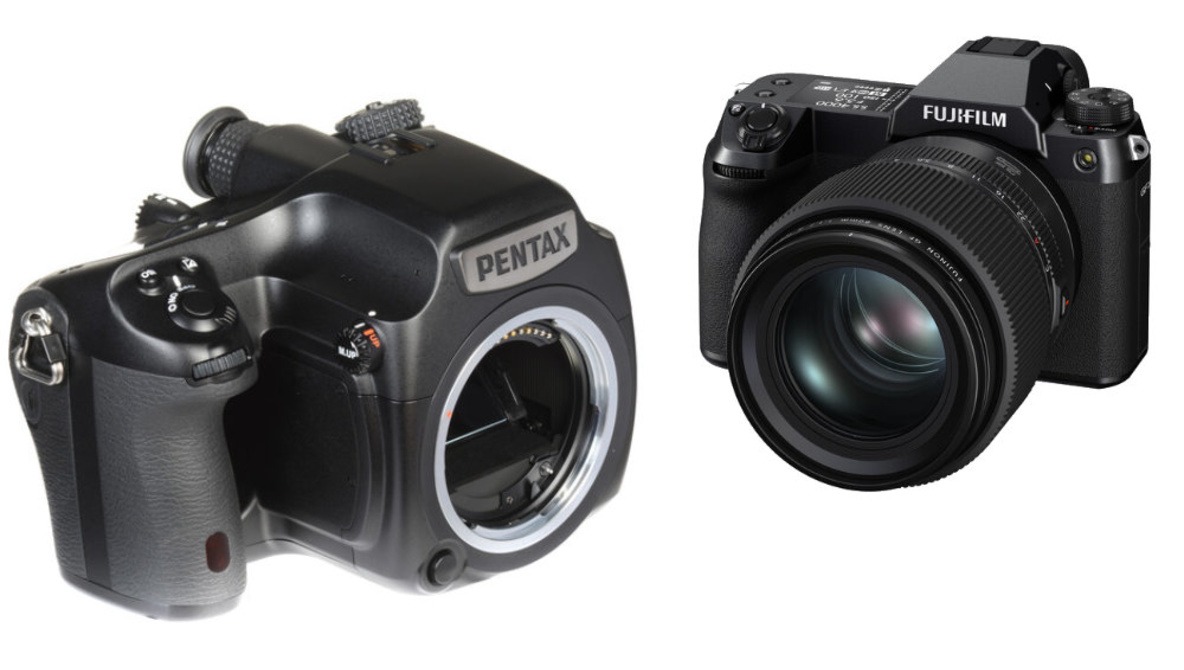 Leica took the world by storm with the 35mm camera, and manufacturers have not looked back since. In the film and digital sectors, 35mm has been the mainstay for any serious photographer. However, it is also true that those who wanted a little “more” chose the medium format. This was usually the trademark of certain professionals with a corresponding price tag. Then why is Fuji using a digital market that Pentax apparently had at its feet?

In the beginning there was a large format with the invention of the daguerre type and its 6.5 x 8.5 inch full board. Not only did this give you great image quality, but it also allowed you to view the image directly and – using the Calotype – contact the full size print. It was the patent of the roll film holder from 1881 and its use by Kodak with the invention of 70 mm roll film that switched the industry to medium format and lighter weight cameras that produced good images. This came in the form of Kodak’s first roll film camera, which was eventually superseded by the Brownie in 1900 (and by 120 films in 1901). However, it was the film industry that viewed 70 mm films with interest and led to the establishment of the 35 mm format (with 18 x 24 mm images) before it was subsequently redesigned by Leica for their new still camera, the finally in 1924 when the Leica 1 appeared. The 35mm format took the world by storm, and while both 120 film and plate cameras remained popular beyond that point, the scene was set for massive expansion. The basic principle was simple: good image quality and small cameras, which meant lower costs and, through Kodak’s business model, the democratization of photography.

And so, with the advent of roll film and the formative medium format years of Hasselblad, Bronica, Mamiya, Fuji and Pentax in the 2000s, we fully entered the digital world. As with other parts of the camera world, digital had already arrived and in some ways it was an easy transition. Cameras were usually built in a modular way, which meant simply producing a digital back. Leaf was launched in 1992, followed by a number of other vendors. It was Nikon’s landmark D1 release in 1999 that catapulted the digital to the fore and shaped the success of medium format film sales. A transition to a fully digital system had to take place. However, the costs were high and sales were low. Mamiya re-launched its ZD camera in 2004, but technical difficulties caused delays that then made it obsolete. In the 1990s, Hasselblad sold the Fuji-made XPan and that collaboration continued with the production of the H-series. Unfortunately, Hasselblad’s digital division closed at the height and subsequent decline of medium format film. The latter led to the closure of Bronica and Contax, but Hasselblad survived and subsequently bought camera back maker Imacon to make up for its digital shortage. Hasselblad earned its survival by being one of the few remaining. Mamiya was sold to the market leader Phase One, which at that time had already acquired Leaf.

The interesting thing about Phase One and Hasselblad is that both made digital versions of traditional modular medium format systems. But was that what the market wanted? In the history of the medium format camera, experiments have been conducted with 35mm-style SLRs (like the Pentax 67) and range finders (like the Bronica RF), as well as integrating automatic shooting modes, although it can be said that Hasselblad, Mamiya, and Bronica all built popular ones Systems off. Perhaps the success of the DSLR in the 2000s changed the style of shooting for many professionals, so it may be surprising that a similar medium format system took so long, especially with the advent of mirrorless cameras. By 2010, Leica had re-entered the medium-format elite and was soon joined by Pentax. The former offers real DSLR recordings, while the latter brings the inexpensive digital medium format to the party.

There was clearly a resuscitation underway. Would other manufacturers be tempted to push the format forward? It took a few more years, but within a few months both Hasselblad and Fuji were releasing new medium format mirrorless systems. These were really slim in the medium format and were largely the same as full-screen DSLRs. Perhaps surprisingly, both systems were competitively priced, putting them dangerously close to full screen territory.

Where is the heading of the medium format?

Let’s start with Pentax, which had been in an almost ideal position by the 2000s. It had a small but loyal customer base coupled with a legacy of producing high quality products at competitive prices. Perhaps most interesting of all was the fact that a full line of camera systems from APS-C and full-frame DSLRs to two mirrorless areas (Q and K-01) and their medium format were filled in digitally by all manufacturers 645. It really has the capacity and ability to serve an extensive range. This, of course, hides the terrible flaws of the unfortunate MZ-D, which should have rivaled Nikon and Canon, to the poor reception of its mirrorless models. It remains with its highly rated DSLRs and the lonely 645Z from 2014. This approach is in stark contrast to Nikon and Canon, who have pursued a strategy with their original with two APS-C // full-screen DSLR sensors. It’s mirrorless now.

Elsewhere in the medium-format market, Hasselblad and Phase One have taken distinctly different paths. Hasselblad sought to build three solid systems targeting different market sectors. The V-System continues the legacy of its original system from the 1950s. The H-System is a complete redesign of the V for a digital world, while the X-System is the first mirrorless medium format. Phase One now has the XF and XT systems. The former, like the H-System, is a studio camera and not something you’d like to hop around town with, while the latter is stripped down and intended for field use, although it isn’t exactly ergonomic like the X-System is. How much profit will result from the sale to professional photographers remains to be seen and shows an important sales strategy for both Hasselblad and Phase one: industrial applications.

Perhaps the most obvious area is in surveying aerial imaging, where image quality is of the utmost importance. It combines metric cameras with the highest quality lenses in a market where prices – and margins – are much higher. The biggest change, however, came from the introduction of UAVs in the industrial space and the need for camera systems designed from the ground up to realize this potential. Both Hasselblad (A6D) and Phase One (iXM) have successfully upgraded their medium format credentials so that DJI now holds a majority stake in Hasselblad. Selling an integrated UAV camera system is clearly much more desirable. However, Phase One is well advanced in the development of camera systems such as an 880-megapixel unit with a 280-megapixel vertical camera and four 150-megapixel angled cameras.

At the high end, not to mention Leica, which has a medium format range in the form of its latest incarnation, the S3which, like everything else, Leica plays in a league of its own (and its own price).

Finally, there is Fuji and its GFX medium format models. It is worth remembering that Fuji has a long history of medium format film making both traditional modular systems and more compact rangefinders. The GFX is perhaps the natural digital culmination of this past, and when it arrived shortly after the Hasselblad X1D, it became the cheapest medium format camera. Fuji took a more fragmented approach to its digital cameras, originally based on a wide (and successful) range of compact and bridge cameras, as well as Nikon’s redesigned Finepix Pro DSLRs. It wasn’t until the arrival of the X series in 2012 that they redesigned their camera system. It is entirely possible that a medium format model was always in development until the system was successful.

This brings us back to Pentax and the digital 645. When that came it was based on a long legacy of the 645 with an appropriate selection of matching lenses. In addition, the quality of the digital images was high and, in typical Pentax fashion, the price was very affordable. In short, it was a desirable camera and sold healthy. However, the 2014 645Z remains the culmination of its accomplishments in digital medium format, and both Hasselblad and Fuji have subsequently released mirrorless models for the same price. In fact, it is instructive to check prices at B&H as Fuji is still the cheapest, followed by Pentax and Hasselblad. There is clearly a medium format market, and it remains to be seen how much it overlaps with full frames that Nikon and Canon are betting their money on. As Hasselblad and Phase One have demonstrated, industrial applications have the potential to increase investment and therefore profits, but on the consumer side, Fuji has launched an enviable product.

Does Pentax have an answer? That remains to be seen, but it is worth remembering that the inflow of products came after the Hoya acquisition in 2008. The imaging division was then sold to Ricoh in 2012.

Nets-Celtics Playoffs Preview: Can Boston Be More Than An Improvement For Kevin Durant, James Harden And Kyrie Irving?

Wolfgang Tillmans, MoMA review – has time caught up with the photographer?

Inside World of Valaya: interiors, fashion, photography and art