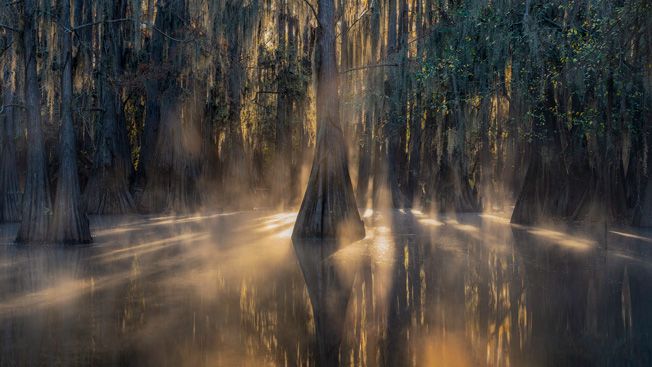 The winners of the Epson International Pano Awards 2021 have just been announced and this year’s images are breathtakingly beautiful. From the mystical wetlands of Louisiana to the colorful but poisonous landscapes of Huelva, Spain, the category winners couldn’t be more different.

The overall winner of the 2021 Open competition was US photographer Joshua Herman, who submitted three entries – Eternal Triangle, Morning Burn and Ancient Backwaters. All three images were taken in the Louisiana marshlands and swamps and show how much difference the time of day and time of year can make. Each picture focuses on a different cypress, each beautiful in its own right.

Herman describes how he created the painting Morning Burn: â€œWhen the conditions are right and cool, moist air begins to warm over the water in the swamp, mist begins to form over the water. If you are lucky enough that the fog stays when the sun breaks through the horizon, a wonderful show is going on. There is a short window of time during which the sun begins to set the fog on fire with light. As I paddled, the scene in front of me kept changing, with the sun just inches above the horizon. I stopped in front of this grove and set up my camera while the swamp in front of me played a light show. “

The Austrian photographer Daniel Trippolt received first prize in the amateur competition for a series of images with the titles Shining Night, Shining Heart and Legendary Peaks. Trippolt’s images, captured in Slovenia, Switzerland and Italy, are truly breathtaking landscapes that capture the light from the stars, moon and sun in a way that feels ethereal. Trippolt started photography at the age of 12 after his father gave him his first camera.

Trippolt specializes in hyperreal landscape photography, which differs from other Austrian landscape photographers. The fact that the Covid crisis has limited his shooting ability over the past two years makes him even happier that he won the amateur awards.

The last category was the Epson Digital Art Prize, which the Spanish photographer Manuel Enrique GonzÃ¡lez Carmona won for his abstract painting Anatomy Lesson. Honestly, the photo looks more like an abstract painting, but it was actually taken with his drone. Carmona explains: â€œMinerals, water and water currents are the ingredients with which nature creates these ephemeral landscapes. The canvas changes with every rainy season. This canvas is actually a raft of toxic waste from a copper mine in the province of Huelva, Spain, captured through aerial photography. These ephemeral formations will disappear with the next heavy rains. “

Since he lives only an hour away from these ever-changing formations, he usually visits him once a week and there are always countless new structures that allow him to create countless abstractions and figurations. Carmona often feels like he’s capturing fragments of a work of art by an abstract impressionist painter rather than capturing something that happens naturally.

The Epson International Pano Awards are the largest panoramic photography competition. This year, despite the global pandemic, the competition received 5,378 submissions from 1,245 professional and amateur photographers from 97 countries.

Other categories included a VR / 360 category, which Russian photographer Oleg Gaponyuk won for his 360-degree image of a jellyfish lake in Palau, as well as a Raw Planet Award, a Curators Award and a Nikon Australia Award. Special awards were also given to photographers for the aerial photo with the highest score, the smartphone panorama, the film recording and the IAPP member.

Contest curator David Evans was blown away by this year’s entries, describing them as “nothing less than amazing”. He said: “We are once again overwhelmed by the support from participants and sponsors, especially Epson, and we thank you all so much and also congratulate all this year’s winners and participants.”

To see the top 50 winning pictures and to find out which photos won the special prizes, visit the Pano Awards website, which also provides information on the prizes and the jury.

Scroll below to see a selection of our favorite images: