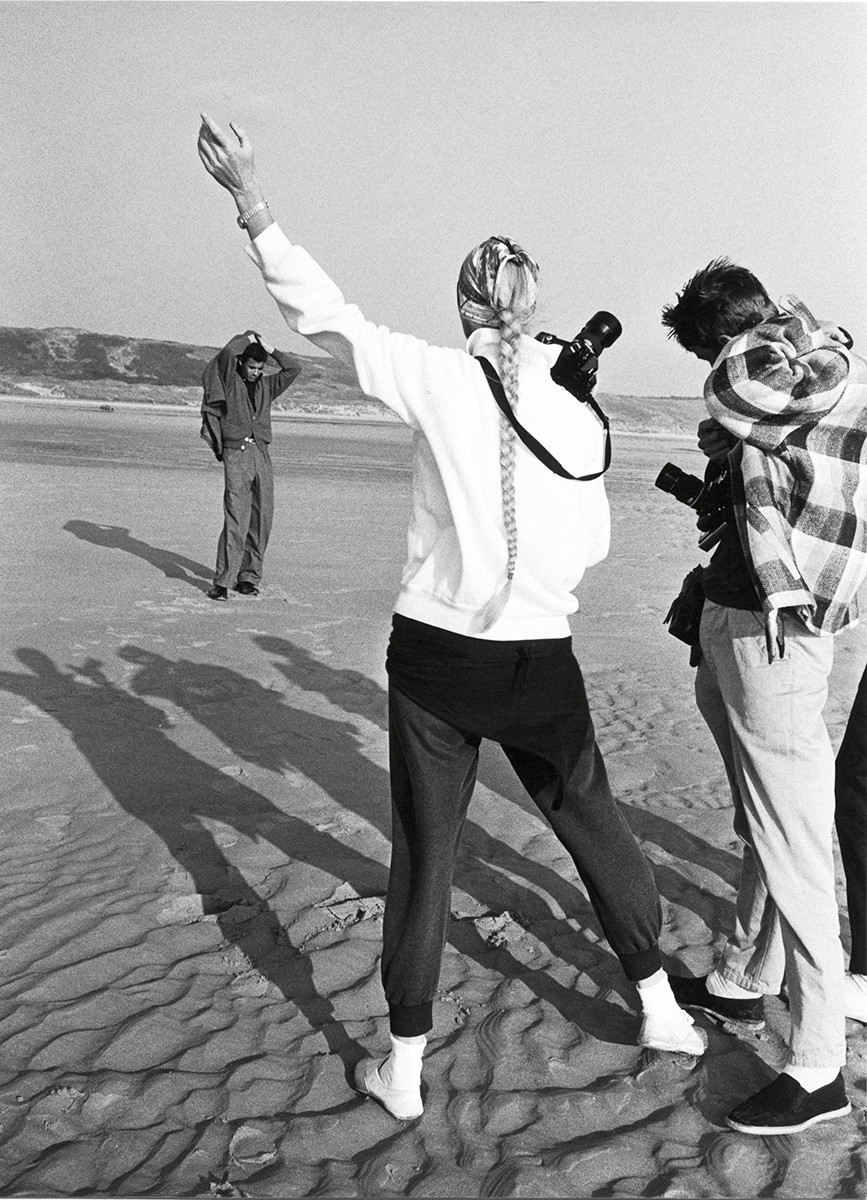 The exhibition in Stedelijk Museum tells the story of a Dutch woman who began studying photography at the Sint Joost Academy of Fine Arts in Bréda in the early 1960s in order to quickly reach the highest level of international fashion photography. Throughout her 50-year career, her images testify to the changes in fashion and reflect those in the cultural and social world. The talent of Sacha van Dorssen (born 1940 in Rotterdam) was noticed during an internship at Elle magazine in Paris in 1964. She immediately decided to settle there and began intensively photographing fashion for the press. It has been published in France and abroad, in Marie Claire, The Sunday Times Magazine, Vogue Hommes, and in English and German Vogue; She worked with many artistic directors and, early in her career, photographed models who would later become real stars. She was also associated with agencies such as Mafia and Publicis, on many advertising campaigns for Yves Saint Laurent, Roc, Dim, l’Or, Club Med and has also contributed to several books by the Éditions du Regard about Dior, Fortuny and Old England. Sacha left Bréda in her youth, only to return half a century later, at the end of an impressive journey during which she saw the ready-made clothing of a new generation of fashion designers emerge in France. Her exhibition, which is currently located in two large rooms of the Stedelijk Museum, traces this journey with a selection of around 75 photographs, including numerous large-format prints, around twenty magazine covers, as well as reports and documents that illustrate the way she works.

Excerpts from an intervention in the Stedelijk Museum in Breda on the photography of Sacha Van Dorssen on the occasion of her retrospective.

During an internship at Elle magazine in 1964, then Art Director Peter Knapp gave Sacha some pictures to take. Instead of returning to Breda to finish her studies, she decided to settle in Paris and started photographing fashion. In this area, Paris was still a great capital: she found herself in direct contact with this universe to which she devoted her entire career.

How could we characterize your photography? Initially through her color practice, although she was also commissioned for black and white. Color means some form of realism, while black and white tends to detach the picture from the real. For Sacha, it’s not about a rich color, like for example the pictures of Steve Hiett that we stood next to her in Marie Claire; or Sarah Moon, who long played with the grit of the film she used.

Sacha mainly works outdoors. In real, simple, natural environments. Sometimes very far from Paris, but in a landscape that in the end always remains very subtle; the beach is one of her favorite places, undoubtedly because of the generosity of space and light.

A bit of history: Fashion photography somehow came out of the studios with operators like Martin Munkacsi, who worked for Harper’s Bazaar and its legendary art director Alexey Brodovitch in the 1930s. We know his pictures of sporty women in motion. Richard Avedon later crossed the practice of fashion photography with that of reporting, still for Harper’s Bazaar and Alexey Brodovitch. Then William Klein took fashion to the streets for Vogue.

Not to be forgotten is the historical development of fashion: Haute couture has gradually been replaced by ready-made goods. Christian Dior took part in this movement from the late 1940s with his “New Look” style, which embodied the modern woman. He thought of the silhouette of women differently, more free in their gestures and movements.

In photography, this change from the studio to the outside world is a bit like in the cinema with the Nouvelle Vague in France. We are now filming real life, everyday life, the street, natural landscapes.

However, Sacha works outdoors with as much precision and control as if she were working in the studio. The rendering of the colors, the direction and the quality of the light have been meticulously arranged. It is essentially this natural light that illuminates clothing. Because Sacha never forgot that in fashion photography, there is the word fashion: She strictly respected the purpose of the order. As for her precision and method, we can guess from the notebooks she carefully kept and in which, next to a small polaroid, she recorded the information about her recordings: aperture, speed, sensitivity. of the movie.

Her photography is an expression of harmony between the subject and its surroundings. If the landscape can suggest a story, it always stays in place, as a backdrop. The situations she staged were mostly very simple. The shoot naturally included the direction of the models, but it can hardly be seen, not felt: everything was always very natural. As if it were a report. Although she portrayed more challenging situations, these remained believable, one could even say that they were accessible to the eyes of the magazine readers who, at the end of the chain, were the recipients of the visual message.

In fact, when you took pictures you almost forgot that they were models. Never comedy or flashy poses: the “girls” exist, move, and offer themselves to photography as they are; beautiful but without art. The gestures are natural, not fabricated, never eccentric. In addition, Sacha’s universe unfolded far from luxury, frivolity and worldliness. She featured models – most of them female – who the people who saw her pictures or read the magazine could almost identify with. She knew exactly how to translate the right atmosphere that would offer these readers a vision of a world to which they imagined themselves to belong.

Sacha has accompanied the emergence of a generation of couturiers who have been involved in the industrialization of prt-à-porter in France, but also in Italy and Japan, and have developed their own personal style at the same time. A magazine like Elle, invented by the journalist Hélène Lazareff, supported the democratization of fashion by selling ready-to-wear. Between the 1960s and 1990s, first in Elle, then in Marie-Claire in particular, but also in foreign magazines that were not always devoted to fashion, Sacha witnessed the creations of these new couturiers. They are not only men, there are also designers like agnès b. This generation had names like Yves Saint Laurent, Karl Lagerfeld, Emmanuelle Khanh, Jean-Paul Gaultier, Thierry Mugler, Claude Montana, Sonia Rykiel … as well as Japanese people like Kenzo and Issey Miyake.

In the monthly magazine Marie-Claire, for which Sacha worked for more than two decades, she published a multi-page story in almost every issue, the style of which we can easily recognize: it stands out from the black and white photographs by Peter Lindbergh or the Polaroids by Paolo Roversi. A group of loyal fashion editors moved around Sacha: real journalists. They closely followed everything that came out of the fashion houses and made decisions with an independence of mind and freedom of expression that led them to have a real discourse on made fashion. Photography served its purpose. In her company, Sacha did not try to put a personal mark on it; It was about creating an image that gives clothes the main role. And her precise knowledge of fashion, materials, shapes and folds has always guided her approach.

An often large team accompanied Sacha during the shoot. And she always emphasized teamwork and showed great humility. For them, a fashion photo is the result of a team’s work; that unites the efforts of everyone: editor-in-chief, model, hairdresser, make-up artist, assistant, even driver!

Today a page was turned. The press economy has changed, magazine budgets no longer serve the same goals. The printed press has lost power, its resources have become increasingly scarce, information and communication have shifted to other media. We could also mention the use of digital technology that has changed the practice of photography. And then the presentation of fashion in magazines merges more and more with the advertising pages. The conditions of the advertising market, if not to say dictate the content of the editorial pages.

In the 50 years of her career, Sacha’s pictures have seen the changes in fashion, but also reflect those in the cultural and social world. If she worked a lot for Marie-Claire, it was certainly also because this magazine defended a certain image of women and was committed to social, cultural and moral issues. With this, Sacha implicitly showed the development of the role of women. She testified to her emancipation and especially the greater freedom of the body. Each time with great respect for the person photographed and extremely demanding. In retrospect, the pictures are an expression of great happiness in life, while they conscientiously respond to the occasion of the recording.

Do you need a full frame camera for landscape photography?