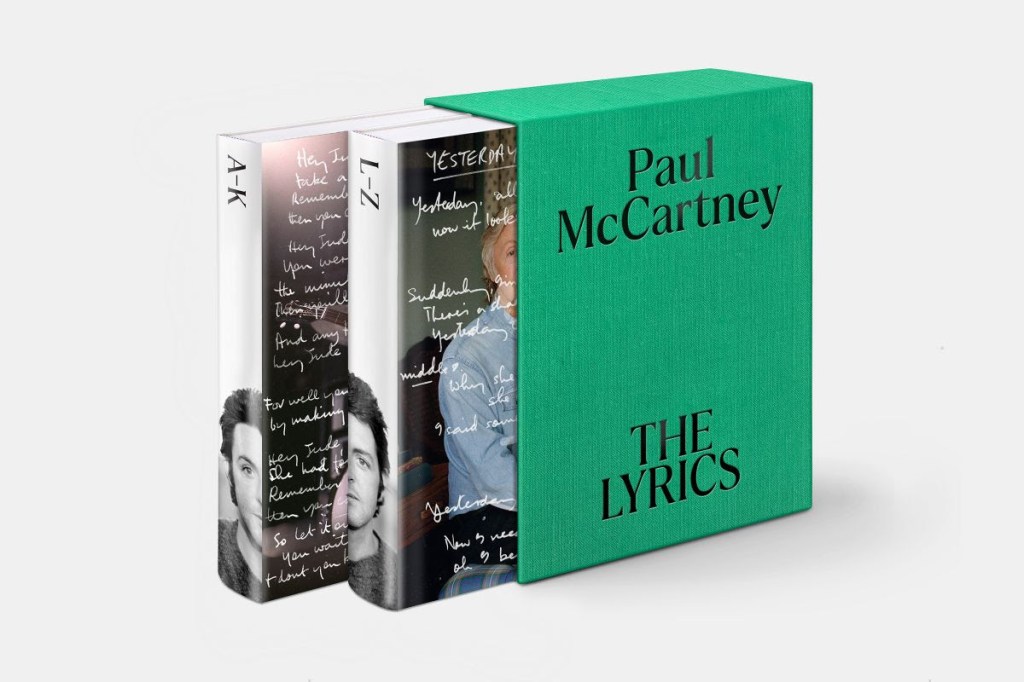 Music is no longer just for the ears.

Books on music, from heavy memoirs to weighty coffee table photo books, continue to grow and the last few months have brought an abundance of fascinating volumes. As Christmas approaches, when you may have some time to read and are still looking for gift ideas, here are two dozen of the most notable titles.

“The Lyrics: 1956 to the Present” by Paul McCartney (Liveright / WW Norton): The next McCartney says that he’ll ever get to memoirs is, well … fabulous. In this handsome, weighty package, he tells his story through the words to 154 of his Beatles and solo songs, adding commentary, artwork, and other ancillary memorabilia that are revealing and have their place in poetry and literature as well as popular music .

“Band of Gold: A Memoir” by Freda Payne with Mark Bego (Yorkshire Publishing): Anyone who only knows Payne through the hit single that gives this book its title will learn a lot on its 372 pages. The Detroit-born singer had a Forrest Gump life in music and entertainment, all the way up to a brief affair with Motown founder Berry Gordy Jr. and experiences with some of the greatest musicians of her day – all of which makes for a golden trail of memories.

“The Storyteller: Tales of Life and Music” by Dave Grohl (Dey St.): Speaking of Forrest Gumps, few musicians are more ubiquitous than Dave Grohl. Being in Fear would be more than enough for Nirvana and Foo Fighters, but he has friendships and collaborations (casual dinners with Paul McCartney, anyone?)

“Unrequited Infatuation” by Stevie Van Zant (Hachette): Van Zandt is another of those characters who did that and says he was responsible for it. He fills these pages with a series of wonderful adventures beyond Bruce Springsteen and “The Sopranos,” and the dizzying parade of encounters leaves the reader in disbelief and immensely entertained.

“Led Zeppelin: The Biography” by Bob Spitz (Penguin Press); “Beast: John Bonham and the Rise of Led Zeppelin” by CM Kushins (Hachette): Led Zeppelin does not seem to have been exhausted as a book topic. Spitz ‘latest is perhaps the most definitive of the band bios, which has been exhaustively researched and sourced to present a plethora of research that is still well underway with the band’s energy. “Beast”, on the other hand, is a welcome glimpse into the complicated life of the band’s drummer, a Mount Rushmore character both as a player and as a rock ‘n’ roll personality.

“Eruptions: Conversations with Eddie Van Halen” by Brad Tolinski and Chris Gill (Hachette); “Unchained: The Eddie Van Halen Story” by Paul Brannigan (Permuted Press): A year after his death, we get two profound and insightful views of what made Eddie Van Halen such a legendary figure. Guitar experts Tolinski and Gill chat not only with him, but also with his fellow human beings for a three-dimensional portrait, while Brannigan’s British perspective offers different perspectives on Van Halen’s play with stature.

“The Beatles: Get Back” by The Beatles (Callaway Arts & Entertainment): A companion to the Peter Jackson documentary series and the recent release of the album “Let It Be” offers a treasure trove of photos of Ethan Russell and transcriptions of key moments from the film, a worthwhile memento of an important project.

“Renegades Born in the USA: Dreams, Myths Music” by Barack Obama and Bruce Springsteen (Crown Books): The podcast is more fun listening to than reading the transcriptions, but the wisdom and wit, not a bit of music, of those conversations still translate nicely onto the page.

“Set the Night On Fire: Living, Dying, and Playing Guitar with the Doors” by Robbie Krieger with Jeff Alulis (Little, Brown): The youngest member of the Doors is doing something his bandmates didn’t do in their previous memoirs – it sounds like being in the band was fun. Krieger doesn’t leave out the dark side, but he balances it with the joy of the Doors’ accomplishments and some insightful glimpses into the musical and personal inner workings of the band.

“The first 21: How I became Nikki Sixx” by Nikki Sixx (Hachette): Prior to “The Dirt” and “The Heroin Diaries,” Frank Feranna Jr. was a misplaced youth seeking identity and community – which he eventually found as rock ‘n’ roller and co-founder of Motley Crue. This is the genesis of Sixx, filled with adventures and mishaps as well as a surprising amount of warmth that brings flesh and heart into the villain image he cultivates.

“My Life in Dire Straits” by John Illsley (diversion): The inside story of the bassist and co-founder of the band, who besides front man Mark Knopfler (who wrote the opening credits) is the only one who has accompanied the band all their life. With little reliable substance written about Dire Straits, Illsley’s clear tome opens eyes from beginning to end – right through to the band’s seemingly accidental and casual end.

“Nothing but a Good Time: The Uncensored Story of the Hard Rock Explosion of the 80s” by Tom Beajour and Richard Bienstock (St. Martin’s Press): The title is taken from a Poison song, but it goes perfectly with the book, a 560-page oral story about what went on in Los Angeles from the late 70s to the 80s, when the teenage spirit started smelling of grunge. A treasure trove of anecdotes presented in an energetic clip that reflects the scene in question.

“Two Steps Forward, One Step Back: My Life in the Music Business” by Miles A. Copeland III (Jawbone Press): As a talent manager (including Brother Stewart Copeland’s band The Police) and record company director, Copeland has helped bring a lot of great music to the world. He has stories, and he tells them here, mixing well-deserved pride and self-irony as he leads us from the British pubs to the Hollywood Hills.

“It Ain’t Retro: Daptone Records and the 21st Century Soul Revolution” by Jessica Lipsky (Jawbone Press): There are a few artists on the Daptone label, like Sharon Jones and Charles Bradley, who deserve their own books. Lipsky weaves together the story of a small company that could – and did – and bring us some essential pieces of music that would otherwise not have come through the machine.

“Rock Concert” by Marc Myers (Grove Press): Mark Myers attempts to construct an oral history of the concert industry, and he gets fond memories from a number of artists, agents, promoters, and others. Long passages from the same person make this more of a slog than a flow in frequent places, but the topic is strong enough to make the gems worth finding.

“A Life in Focus: The Photography of Graham Nash” by Graham Nash (Insight Editions): The two-time Rock and Roll Hall of Famer took photos as a kid before making music, and his sophisticated eye can be seen in this collection, which includes priceless, often sincere, pictures of musical peers and friends he made throughout his long career .

“Made in Hollywood: All Access with the Go-Go’s” by Gina Schock (Black Dog and Leventhal): A coffee table photo book, more than a memoir, it doesn’t go as deep as “All I Ever Wanted” by bandmate Kathy Valentine, but its sincere pictures, taken by the drummer herself, as well as her memories tell their own story and take us away with behind the scenes and closed doors in the band’s storied career.

“Talk to myself” by Chris Jagger (BMG): Mick’s little brother doesn’t exchange cheesy secrets in these memoirs and indeed notes that he had a pretty life of his own as a musician, actor, and journalist. The book was released along with a new album, Mixing Up the Medicine, for a simultaneous ear and eye for Jagger.

“Six-String Stories” by Eric Clapton (Genesis Press): The veteran guitar hero has become a polarizing figure lately, but reading stories about his instruments, many of which are being auctioned off in aid of his Crossroads Center rehabilitation facility in Antigua, allows us to put other problems aside and one man’s passion to appreciate for his chosen goal.

“Fender 75 Years ”by Dave Hunter (Motorobooks): This sanctioned, lavishly packaged tome offers a full history of a company that changed the face of music, from its first lap steel guitars in 1946 to industry-standard guitars, bassists, amps, and other equipment.

“Twisted Business: Lessons From My Life in Rock ‘n’ Roll” by Jay Jay French and Jim Farber (Rosetta Books): The Twisted Sister guitarist is now a business columnist and motivational speaker, but he spices this book up with enough anecdotes to keep it from becoming just an academic exercise.

Fashion photography is more about the creativity of the image: Musthaq Thasleem