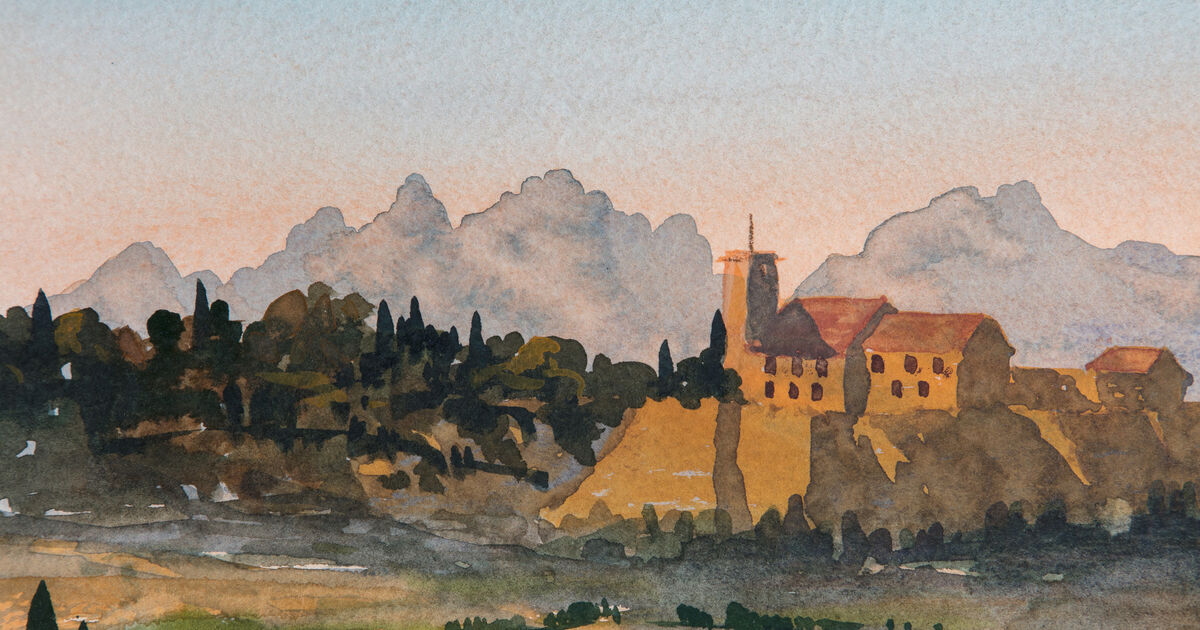 The Prince of Wales has described how he finds painting so relaxing that it â€œtakes me to another dimensionâ€ as the largest exhibition of his works of art is being staged.

Seventy-nine of Charles’ watercolors – the first full exhibition of his work in this medium – are on display at the Garrison Chapel in Chelsea, London.

The atmospheric paintings show Scottish landscapes such as the Huna Mill in John O’Groats and Glen Callater near Balmoral, as well as exterior scenes from Provence in southern France and Tanzania in East Africa – one of the prince’s favorite places to paint.

In a display, Charles reveals how the hobby “refreshes parts of the soul that other activities cannot” and how he started painting after he had found little joy in photography.

He writes about the therapeutic benefits: â€œYou become more and more aware of things that you may not have considered before – things like the quality of light and shadow, of tone and texture and the shape of buildings in relation to the landscape.

â€œAll of this requires maximum concentration and is therefore one of the most relaxing and therapeutic exercises that I know.

“In fact, I find it in my case that it transports me into another dimension that literally refreshes parts of the soul that other activities cannot reach.”

But he admits that he is “horrified” by the quality of his early sketches.

â€œI only started painting because I found photography less than satisfying,â€ he writes.

â€œQuite simply, I felt an overwhelming urge to express what I was seeing through the medium of watercolor and to convey that almost ‘inner’ sense of texture that is impossible to achieve with photography.

â€œI realized very quickly how incredibly difficult it is to paint well in such a spontaneous medium, and the feeling of frustration at not being able to get the picture that presented the eye on paper is intense.

â€œWhen I look back on my first sketches, I am appalled at how bad they are. The nice thing about painting, however, is that you interpret the chosen point of view individually. “

From the Haughs, Glen Callater, towards Tolmount through the Prince of Wales (Richard Ivey / Prince’s Foundation / PA)

He adds, â€œI have no illusions that my sketches represent great art or a nascent talent.

“Above all, they represent my special form of ‘photo album’ and as such mean a lot to me.”

The exhibition in the exhibition room of the Prinzenstiftung in the chapel began before Christmas and will reopen on Monday for a longer period until February 14th.

Rosie Alderton, exhibition curator for The Prince’s Foundation, said, â€œHRH has already said that he likes to sit in the real world and paint en plein air, and that taking photos is not the same thing for him.â€ Feeling like a painting .

Charles paints in Paro, Bhutan, during a royal visit in 1998 (John Stillwell / PA)

“His passion for creating fine art is strongly conveyed in this exhibition.”

Charles paints whenever his schedule allows, and he usually takes his precious canvas and leather painting bag on royal tours in the hope that he will have time for them.

His interest – encouraged by his art master Robert Waddell at his Gordonstoun school – grew in the 1970s and 1980s when he was able to meet leading artists.

He discussed the watercolor technique with the late Edward Seago and received further instruction from professionals such as Derek Hill, John Ward, and Bryan Organ.

An exhibition at Hampton Court Palace in 1998 to mark the prince’s 50th birthday featured 50 of his watercolors, while the National Gallery of Australia’s exhibition in 2018 marked his 70th birthday and featured 30 works.

Alongside Charles ‘art, Ben Hymers’ woven rendition of the 2003 Prince’s painting Abandoned Cottage on the Isle of Stroma will be featured.

The complex tapestry, which took eight months to make at Dovecot Studios in Edinburgh, was presented to Charles in 2019 and can normally be seen at the Castle of Mey in Caithness.

The best photo contests for 2022