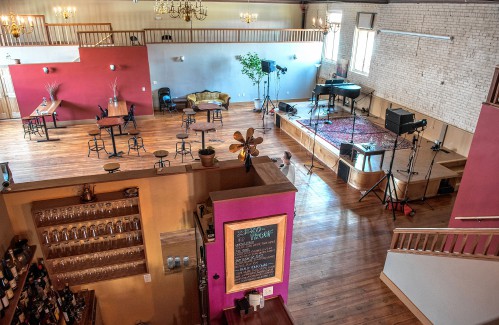 Renovated 1920’s theatre, reborn as The Marigold, aims to bring back the ‘vaudeville vibe’

EASTHAMPTON – If the walls at 84 Cottage St. could talk, the 100-year-old building would undoubtedly have a lot to say.

The grandeur of the space, with pressed sheet metal walls and ceilings, was revived by spotlighting the venue’s newest tenant, the Marigold Theatre, Bar & Cabaret.

Marigold opened to the public in February and presented a range of acts including Latin jazz and piano karaoke, a large dance floor and craft cocktails with and without alcohol. Venue owner Glenn Alper says he has made “significant investments” to bring back the vaudeville vibe with variety shows and live musical performances.

“I want the Marigold to be Easthampton’s entertainment center that will evolve into what the community needs,” Alper said.

In the summer of 2020, the Northampton native, Alper, said he had found himself in a self-reflective state after spending much time working alone at his musical instrument shop, Birdhouse Music. One day he jumped in his car and drove to Easthampton, where he came across a “For Rent” sign on the Cottage Street shop front.

The original Majestic Theater was built by Henry Walz in 1910. The venue presented vaudeville acts, variety shows, burlesque and other types of performances and featured box seats, a balcony, a stage and a capacity for more than 800 people. According to the Marigold website, the former basement theater also had six bowling lanes and a shuffleboard court. William Friel ran the theater and was paying Walz rent of $75 a week in 1912, the website says.

The Majestic burned down on February 4, 1922 and was rebuilt by Stefan Rapalus in 1923, according to Alper.

In the early 1990s, a commercial youth club called The Kitchen Sink offered Friday night dances for teenagers, according to a Gazette report published January 3, 1994. It closed after two months due to a lack of customers.

In 2001, Jo Roessler of Nojo Design purchased and renovated the theater by raising and leveling the sloping floors. He also restored the sheet metal ceilings and several architectural touches.

After Nojo Design moved out of the space, Off the Map Tattoo moved in. The tattoo parlor transformed the venue’s main hall into several cubicle-like rooms with vinyl floors that were better suited for business.

As the most recent tenant, Alper says the restoration process has evolved, with the theater itself directing. On a recent tour, he described some attempts to renovate the space where some ideas “just didn’t make sense” with the atmosphere he wanted to showcase.

“The theater has a lot to say,” he said. “I was trying to create a more sophisticated version of the same thing…something timeless but enhanced.”

Inside, guests are greeted with preserved architectural elements, including the gold-colored tin ceiling and hardwood floors that contain markings where the cinema seats once were; along with a newly constructed sound booth on one side of the space and a new wooden stage on the opposite side, backed with a whitewashed brick wall.

There are several cabaret tables and a few vintage couches throughout the main room.

Alper commended city departments and staff, as well as the wider community, for their support and encouragement along the way.

“It felt more like a partnership with the city,” he said.

Considering the well-established Majestic Theater in West Springfield, Alper said he decided to rename the space after something natural and positive: a marigold.

While the space itself sets the stage for much of the atmosphere Alper wanted to create, he said part of the reason he got into this new business was because he was trying to recreate what’s normal today define.

To date, the Marigold has hosted a number of acts including the Butterfly Swing Band, Brother Sal’s Blues and the Ed Byrne Quartet. Alper’s primary goal is to showcase regional talent that occasionally extends beyond Massachusetts borders.

Currently, the theater hosts between three and five performances each week – some of which include an admission fee – with varying opening times. Upcoming performances are listed at marigoldtheater.com.

The Marigold Theater will also serve as one of several venues as part of the Easthampton Film Festival from 26th to 29th May.

As he works to achieve his goal of being “the entertainment center of Easthampton,” Alper said his entertainment offerings will evolve based on community response. The venue has a capacity for 175 people and tables can be moved to accommodate more participatory events such as salsa and swing dancing. Booking requests can be made through Marigold’s website.

With the help of his 9-year-old daughter, he also hopes to offer some shows for family audiences.

Emily Thurlow can be reached at [email protected]

Campbell Addy on the feeling of being seen, representation and freedom of expression