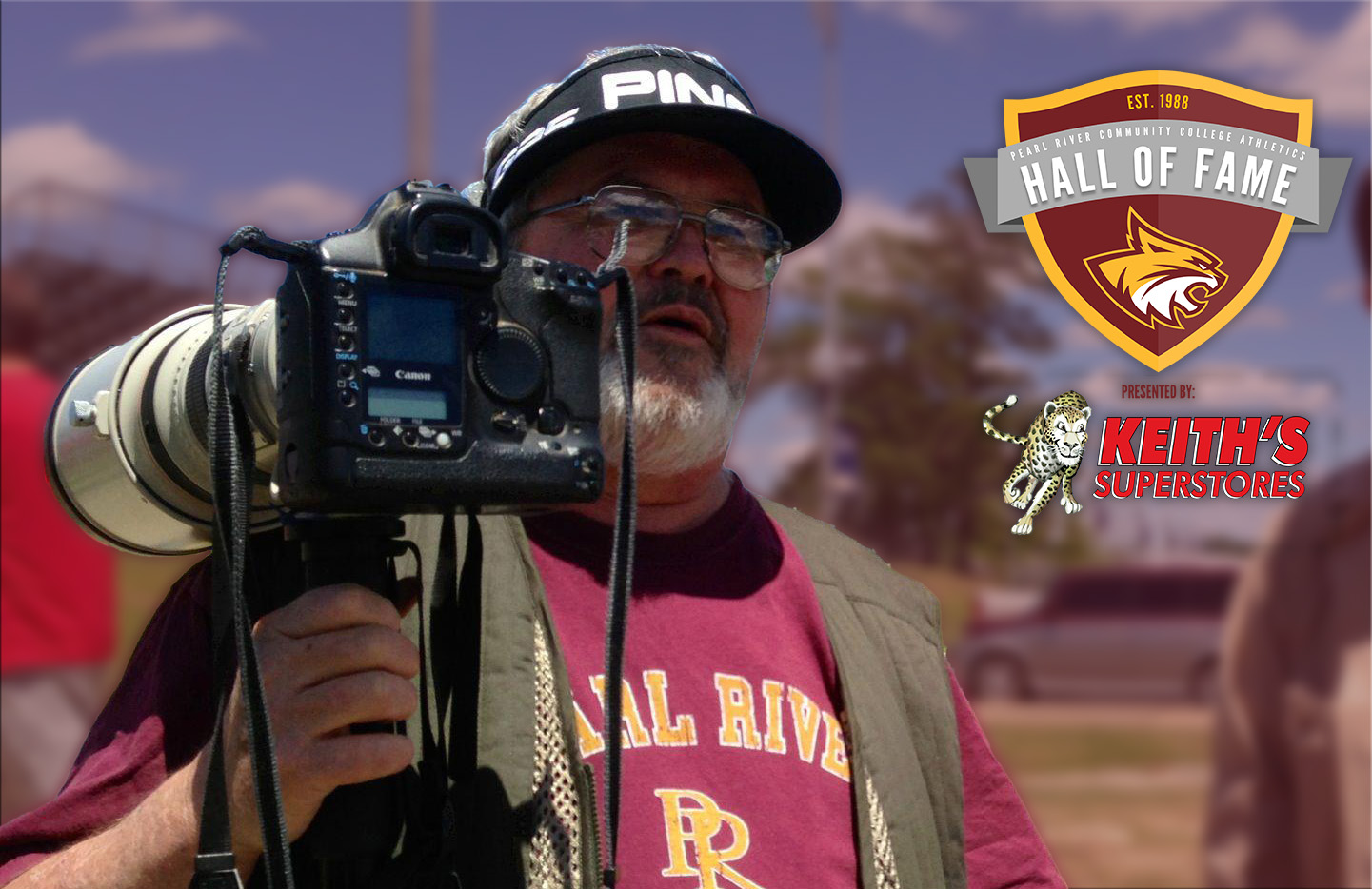 POPLARVILLE, miss— Beloved and longtime Pearl River sports information director Mitch Deaver, who is credited as “the godfather of MACJC athletics” or “the dean of junior college sports information directors,” is scheduled to be posthumously enshrined in the Pearl River Community College Athletics Hall of Fame of Keith’s Superstores on July 29th at the Hollywood Casino & Resort Gulf Coast in Bay St. Louis.

In addition to Deaver, the Hall of Fame ceremony will honor baseball’s Eric Adkins, football’s Terry Wayne Adkins and Ricky Cuevas, softball’s Rachel Hickman Kirkland, and women’s basketball’s Carmen “Coco” Labat. Deaver is only the third non-athlete or coach to be inducted into the Hall of Fame, along with coach Phil “Doc” Hudson and administrator Larry Stanford.

“He wasn’t the type to make much of it, he never did, but I think it would have meant the world to him too. I would imagine his comment was that “none of that was necessary” or something like that. He loved doing it and it’s amazing that others realize that. It’s hard for me to think about how much it would have meant to him. We were emotional when we got the call. It is greatly appreciated.”

PRCC also presents Dub Herring with the first Spirit of a Wildcat Award. The River also honored its 2002 baseball team during the banquet. Led by PRCC Hall of Fame inductor Jay Artigues, the ’02 Wildcats became the first PRCC squad to break through to the NJCAA World Series.

A Purvis native, Deaver grew up fond of sports but chose not to play during high school. It was at Purvis High School that he discovered his new love, newspapers.

“We both had similar interests and worked for the school newspaper staff,” Mac said. “Mitch was a really good artist. Growing up we were called the two kids who could draw. That’s how we started looking into school publications, and that’s when his interest in the print business really began.”

After graduating from high school, Deaver made the decision to attend Pearl River, in part due to the persuasion of Pearl River Hall of Famer Larry Stanford. Stanford was the director of public relations at the time and after seeing Deavers’ artwork, persuaded him to attend the PRCC and work in the public relations department.

“That was the first thing I remember Mitch getting interested in going to Pearl River,” Mac said. “He immediately got involved in communications and worked for the school newspaper the Dixie Drawl. There he took a liking to the newspaper business. He drew cartoons and wrote many stories. Mitch ended up graduating from Pearl River, but we joked with him that he was on the three- or four-year plan there.”

After graduating from The River, Deaver began a long career in the newspaper business, working for various newspapers in Lamar and Pearl River County. He eventually earned the title of sports editor for the Poplarville Democrat.

Although Deaver worked on and off for PRCC throughout his time in the newspaper business, it was not until April 1996 that he moved to a full-time position, where he spent the next 19 years of his life as the college’s sports information director.

During his time as the Wildcat, Deaver was known for having a wide range of skills including writing, graphic design, and photography. He was most proud of his remarkable photography, which he used to capture moments at the perfect time.

“He developed his love of photography at PRCC. It started really fast. All of a sudden, Mitch had this large inventory of photography gear together,” Mac said. “He loved going to games just to take pictures. He focused on many things in his job, but he always went to events to take photos. He stopped drawing as much and transferred his artistic eye to photography, and he was very meticulous about it. He rushed across the fields and took dozens of photos. For this he really became known among many of his other talents.

“He sent me Manila envelopes with pictures he had taken that he thought I might like just so I could have them.”

“Mitch wasn’t just a super photographer. He was also a very good graphic design specialist. He designed the covers for all of our PRCC sports brochures and programs,” he said. “Before sports photography was so hot, he was without a doubt the best sports photographer in the state.”

Even though Deaver passed away in 2015, former athletes still ask for “Mitch’s photos.”

Deaver was also known within the Mississippi Association of Community and Junior Colleges for his commitment to both the PRCC and the conference as a whole. To this day, MACCC Sports Information Directors compile a master football schedule dedicated to Deaver for each season.

“He was doing a lot of things for several of the other sports information directors and the conference at the time of his death. When he died, many schools honored him with nice messages on their websites, naming him the ‘Dean of Sports Information,'” Mac said. “He would have liked that, even though he wasn’t the attention-seeking type. We were very happy about that.”

Deaver was also known for his willingness to lend one of his beloved Atomic Fireball candies.

“I don’t know the origin of the candy, but he really developed a love for it,” Mac said. “He always gave them to people and of course he was happy about them. That was kind of a trademark he had. It sounds so banal, but even at his funeral, a fireball candy was the focal point on the back of the program. He always had her with him. He had a large quantity of it in his vehicle.”

Deaver has not been open about his accomplishments, but Mac Deaver believes he would have been proud if he had known the impact he had on others.

“Mitch wasn’t someone who talked a lot about himself or what he was proud of. He didn’t go around talking about his achievements,” he said. “I know he would have been humbled by the people who responded after his death. I don’t think he was fully aware of how much others valued or thought of him. I think he would be proudest of the fact that he was a staple, had a lot of friends and achieved a lot right where he was.

The fun begins July 29 at 9:00 am with a four-person scramble golf tournament hosted at The Bridges Golf Club in Bay St. Louis. Each golf team costs $600. Teams are limited and interested golfers are encouraged to register at PRCCAthletics.com/.Tickets.

The ceremony will take place that evening, with a social hour at 5:30pm and the banquet scheduled to begin at 7:00pm. Tickets cost $100. Children up to 5 years are free. Tickets can also be purchased at PRCCAthletics.com/tickets.

Sponsorship packages are available for both the banquet and the golf tournament.

The banquet has two tiers of sponsorship, the $2,500 Maroon sponsorship and the $5,000 Gold sponsorship.

There are also several sponsorship opportunities for the golf tournament. PRCC offers $100 hole sponsorship (including a 24×18 sign next to the tee box), $300 sponsorship for longest drive or closest to pins, $500 sponsorship for awards show and $500 -Sponsorship for drinks. Paw-Paw’s Campers & Cars is once again sponsoring the Hole-in-One competition.

PRCC also accepts items for the silent auction and groceries for the golf tournament.

To secure your sponsorship package or make a donation to the event, contact Mary Alice Chandler at [email protected] or 601-403-1193.

Do you know of a former wildcat that you think should be considered in the future? Nominate via https://prccathletics.com/hof/Hall_of_Fame_nomination_form or at PRCCAthletics.com/HOFand click on the nomination form link at the top of the page.